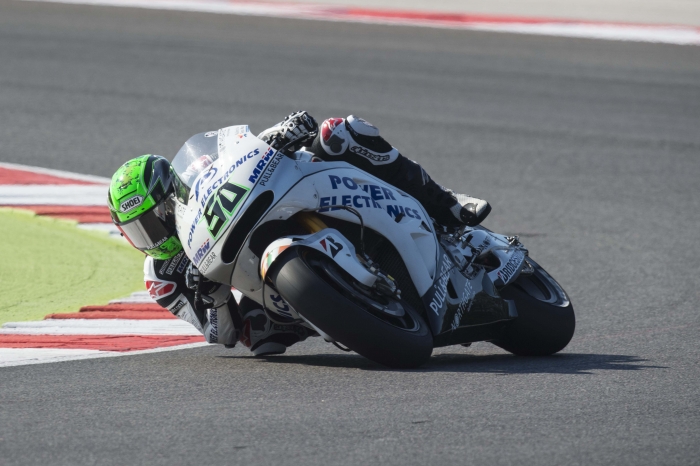 The second day of action at Misano finished just as it started with Lorenzo, Márquez and Rossi on top of the timesheets, although that doesn’t tell the whole story.

Like at Silverstone it seemed Lorenzo and Márquez had the edge here in practice, with Valentino slightly off their pace in third place, but as the pace increased in qualifying so did the competition, with just a couple of tenths separating the trio as Lorenzo claimed pole position with a sensational lap that almost broke the fabled 1’32 barrier.

POWER ELECTRONICS Aspar rider Eugene Laverty is hoping to serve up an exciting race of his own tomorrow after qualifying further back than he had hoped due to a morning session setback today.

Eugene suffered a front-end crash this morning and was unable to recover his good feeling in the afternoon, eventually qualifying in 21st position. Nonetheless he remains confident of his pace and is still looking forward to a good fightback in the race itself.

21st Eugene Laverty 1.34.468:
“Today we noticed that the tyres were taking a little time to get up to temperature and I can’t push until they have three or four laps on them. We’ll have to watch out over the first couple of laps tomorrow but it’s a 28-lap race so we have time to get a feeling. I had a crash this morning that set us back and then in the afternoon the rise in temperature made the track slippery and we didn’t get the result we were hoping for. The time flies past on a Saturday and any little problem creates a mountain of work. Luckily the bike has been working well since yesterday and we have a strong pace so even though we’re starting from quite far back I think we can fight back and finish the weekend with a positive result.”