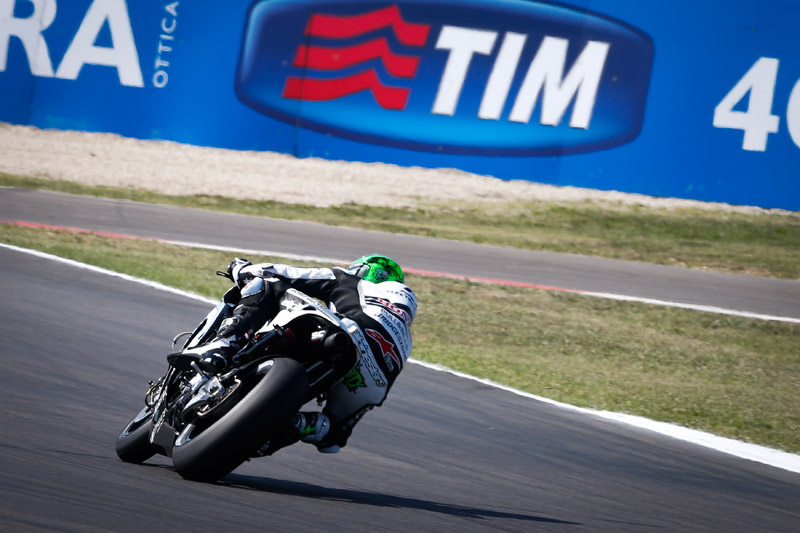 The San Marino Grand Prix kicked off today with all eyes on the battle at the top of the championship between home favourite Valentino Rossi and his team-mate Jorge Lorenzo.

At a circuit that is supposed to favour the Yamahas the fastest lap of the morning was actually set by Honda’s Marc Márquez, although Lorenzo responded in the afternoon with the fastest ever lap of this circuit (1’32.871) to take top spot by 0.053 seconds from his fellow Spaniard.

With Rossi in fifth place after the first day of action here and an all-Spanish top three (Lorenzo, Márquez and Pedrosa), there is sure to be a backlash from the Italian riders tomorrow.

Eugene Laverty has been gradually improving his performances in recent weeks and even though he was denied the opportunity to show it by the weather last time out at Silverstone it seems the conditions will stay in his favour this weekend.

15th Eugene Laverty 1.34.345 (41 laps):
“We have been progressing over the last few rounds, we were strong at Silverstone and we have started out in the same way today. I am a little surprised because I thought that we would suffer more with the characteristics of Misano, so it was a nice surprise to finish as the top Open. We have had a new swingarm since Assen and it took a few races to set it up but now the bike is really effective. The lap times were good today and so was the consistency, so hopefully we can continue to improve tomorrow. The soft tyres worked well for us today so we will continue testing tomorrow to get the best out of them. We were fast in three sectors today so we have one we need to improve in and I need to adapt my riding to the characteristics of the bike. Anyway, I am happy today, we have been consistent.”