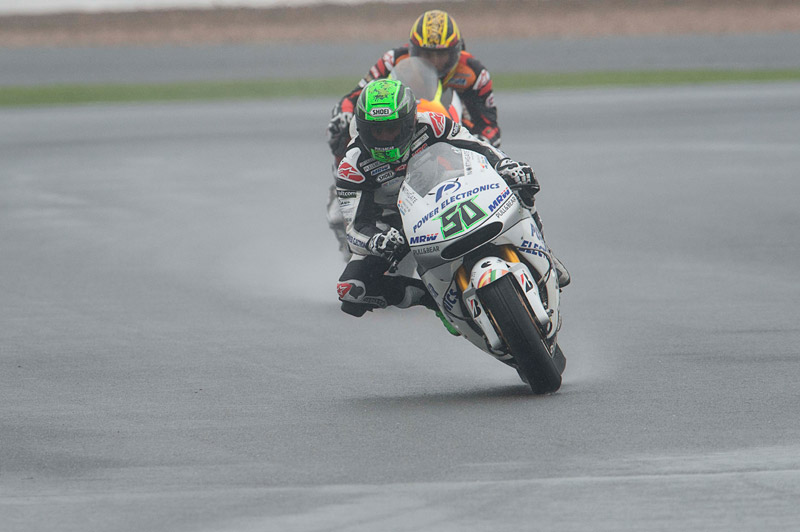 The twelfth round of the MotoGP World Championship kicked off at an unusual time today, with a 1pm start on British soil to coincide with the usual 2pm slot on mainland Europe.

A drizzly day looked to be easing shortly before the start and the riders were able to take to the warm-up lap on slick tyres, but as the rain intensified it immediately became apparent that they would need to switch to wets.

As the riders all came in to change at once a potentially chaotic situation began to develop as they prepared to start en masse from pit-lane, but Race Direction sensibly showed the red flag and the grid was reformed. Jorge Lorenzo made a strong start but his early pace waned, allowing Valentino Rossi and Marc Márquez to escape.

When the Spaniard crashed on the thirteenth lap, the Italian was clear to take the victory and despite late pressure from Danilo Petrucci and Andrea Dovizioso he kept his concentration and his balance to top the first all-Italian podium since round one at Losail.

Eugene Laverty did not make the best of starts to his home race – dropping back to last place on the opening lap, but he worked hard in the treacherous conditions and eventually managed to fight his way back to seventeenth position by the chequered flag.

17th Eugene Laverty:
“We had a little experience with this bike in the wet but my feeling on those occasions wasn’t too good. This was our first truly wet race and I probably rode as well as I ever have in these conditions but I lost too much time in the exit of the corners. I was braking hard and the first part of the corner was okay but we had no grip on the exit. I tried to follow a few riders and copy what they were doing but I had the same issue in every corner. Today showed that we need to find more grip in these conditions. At Misano we will have to work on improving the chassis set-up.”