Eugene aiming to fight for Open win at Silverstone 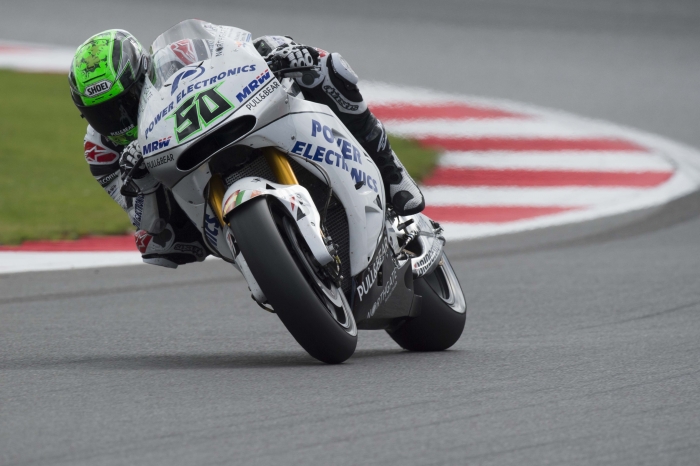 After taking a free practice session apiece yesterday the battle for pole position was very much on between Marc Márquez and Jorge Lorenzo this afternoon.

Márquez took the initiative from the start of the session, followed for much of it by his team-mate Dani Pedrosa until a late effort from Lorenzo secured second on the grid and set up what promises to be another interesting head-to-head in tomorrow’s race.

Márquez stayed clear in top spot thanks to a new pole record lap, with Valentino Rossi in fourth place behind Pedrosa, ensuring a fight for the podium between the four so-called ‘aliens’.

After a disappointing qualifying session the grid position for POWER ELECTRONICS Aspar rider Eugene Laverty does not reflect his performance throughout the rest of the weekend, with Eugene having made consistent improvements to his lap times and set-up right up until this afternoon.

The Irishman ran into traffic on several occasions and as a result could manage no higher than nineteenth place, although he is confident of fighting for Open victory in his ‘home’ race.

19th Eugene Laverty 2.02.894:
“My ideal time today would have put me fourteenth on the grid but qualifying didn’t go as we hoped, basically because I kept running into traffic on track. Everybody was looking for a tow and I tried to push on my own but I ran up behind three riders in the last corner so I had to back off and the tyre lost temperature. Anyway, we have to think positive and focus on our pace, which is good. The feeling on both tyres was good so we still haven’t decided which to use tomorrow. In theory the hard option will be ore consistent but we have to decide. I felt strong today so the goal tomorrow is to fight for the Open win.”