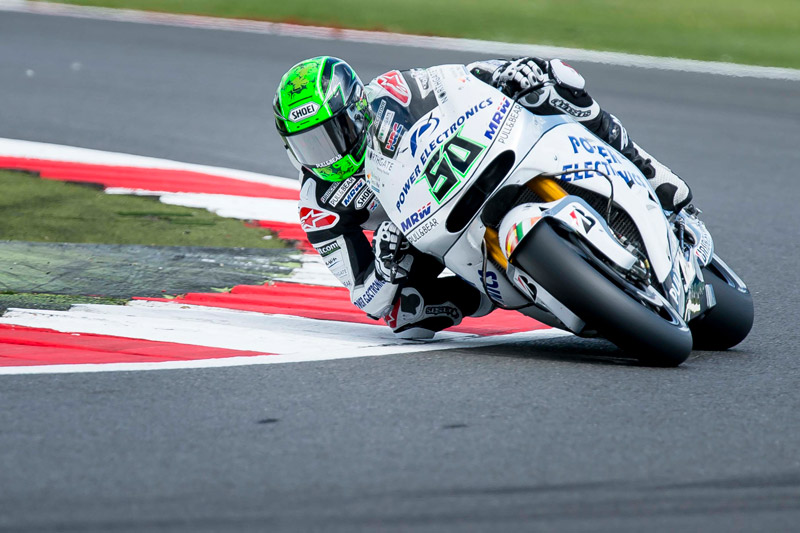 The MotoGP riders tackled the longest circuit on the calendar today as the opening free practice sessions for the British Grand Prix took place at Silverstone. The timesheets were dominated by Lorenzo and Márquez, who were the fastest and most consistent two men on track throughout both sessions.

After Márquez set the pace this morning, Lorenzo struck back in the afternoon to hold off his Spanish compatriot by just 0.033 seconds. The lap times in general dropped dramatically from the first session to the second, with home favourites Smith, Redding and Laverty all impressing in front of their home crowd.

POWER ELECTRONICS Aspar rider Eugene Laverty has enjoyed one of his best starts to a Grand Prix weekend so far this season.

The Irishman lapped fifteenth fastest this morning and finished sixteenth this afternoon, just 1.5 seconds off Lorenzo, as he backed up his comments earlier in the week that Silverstone is one of his favourite circuits and that he’s determined to follow up his recent positive progress.

16th Eugene Laverty 2.03.877 (33 laps):
“We know how important it is to get a slipstream around this track so I tried following a couple of other riders down the straights but in the end I actually set my fastest lap on my own. I was able to set a consistent pace in both sessions so we have to be happy with the way we have started the weekend. There are bumps here, like Brno, but in different places. At Brno they are in the braking zones but that’s not the case here. We still had to adapt the setting to deal with the bumps and we found something this afternoon. This is our best Friday since Jerez, we are starting to see where we can be and that is pushing us on. This is a very technical circuit, where the rider can make a difference so I will be pushing hard to keep up this positive start. Today the feeling with the bike was good over one lap but tomorrow we need to find a little more consistency.”