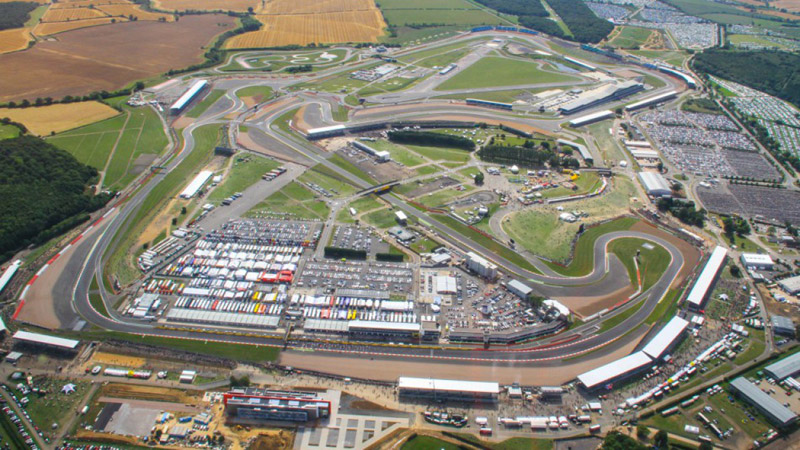 The MotoGP™ title battle moves onto the Octo British Grand Prix with Valentino Rossi & Jorge Lorenzo set for an epic Silverstone showdown at the #BritishGP.

The incredibly tense championship battle heads to Northampton in the UK for the Octo British Grand Prix held at Silverstone, round 12 of the 2015 MotoGP™ World Championship season, with everything reset in the title fight between Rossi & Lorenzo.

There has been a British round in the World Championships since its inception in 1949. Originally held at the Isle of Man TT circuit, in 1977 it was moved to Silverstone due to safety concerns and the British Grand Prix was born. In 1987 it made the move to Donington Park, before returning to Silverstone for the 2010 season onwards.

Silverstone has hosted some epic battles between riders over the years, but rarely before would it have witnessed such a tight and intriguing title fight as the finely balanced one we have on our hands in 2015. Movistar Yamaha teammates Rossi and Lorenzo are tied 211 points at the top of the standings, with Lorenzo holding the advantage due to the fact he has five wins to Rossi’s three. In other words, with 7 races left in the season, it is almost as if someone has pressed the reset button. Rossi and Lorenzo have a level playing field, and that means the British Grand Prix could once again play a vital role in the championship battle. Plus, let us not forget the Repsol Honda of Marc Marquez. For while the reigning MotoGP™ World Champion currently sits third in the standings (159pts) 52 points behind the two Yamaha teammates, 2 wins and 2 second places in the last four races show that he is not out of the fight just yet.

Last year’s British Grand Prix saw Marc Marquez take his 11th win of the season after an excellent duel with Lorenzo, with Rossi completing the podium. If the same were to happen this year, Lorenzo would leave Silverstone with the outright lead in the standings.

Rossi finds himself knocked off the top of the World Championship standings for the first time this season after finishing third behind Lorenzo and Marquez at Brno. Unbelievably, the nine-time World Champion has never actually won at Silverstone, with his 7 victories (1x125cc, 2x250cc, 3xMotoGP™) at the British Grand Prix having all been at Donington Park. The Italian last stood on the top step of the podium in the UK in 2005.

Lorenzo, having won last time out at Brno in imperious fashion, will be looking to stamp his authority on the 2015 title battle and to establish an outright lead in the standings for the first time this season. The Spaniard has won 3 times at Silverstone in the past in MotoGP™ (2010, 2012, 2013) and only lost out to Marquez last year by 0.7s. More aptly the two-time MotoGP™ World Champion has not finished behind Rossi at the British GP since 2011, when he crashed out of the race in the wet.

Marquez had no answer to Lorenzo’s blistering pace in Brno, and will be looking to respond at Silverstone to preserve any hopes he has of retaining his MotoGP™ World Championship title. Even if Marquez does not go on to win the title, he will play a vital role in deciding where it ends up. The Spaniard has won twice at Silverstone, last year’s victory in the MotoGP™ race and also back in 2010 in the 125cc class. His worst MotoGP™ result was second in 2013 when he crossed the line just 0.081s behind Lorenzo.

Marquez’s Repsol Honda teammate Dani Pedrosa will hope to have recovered fully from the injury to his left foot he sustained in FP2 at Brno. The Spaniard finished fourth in last year’s race after an excellent scrap with Rossi and Andrea Dovizioso. Pedrosa has won twice at the British Grand Prix before (250cc – 2004, MotoGP™ – 2006) but both were at Donington Park and his best results at Silverstone are two third places in 2012 and 2013.

Ducati Team’s Andrea Iannone currently lies fourth in the championship standings after his fourth placed finish in Brno, and has not finished outside of the top six all season. Last year the Italian scored his best MotoGP™ result at Silverstone as he finished eighth on the Pramac Ducati. His teammate Andrea Dovizioso won the British Grand Prix in 2009 on the Factory Honda at the last race to be held at Donington Park. He followed that up with two second places in 2010 and 2011 at Silverstone, and finished last year’s race in fifth.

Team Suzuki Ecstar’s Aleix Espargaro qualified in fourth for last year’s race on the Forward Yamaha before eventually crossing the line in 9th. His rookie teammate Maverick Viñales took the 2012 Moto3™ victory at Silverstone, and finished on the podium last year in the Moto2™ race. Viñales (62pts) currently leads his more experienced teammate Espargaro (53pts) by 9 points in the standings.

Monster Yamaha Tech 3’s Bradley Smith (106pts) heads to his home Grand Prix as the leading Satellite rider, fifth in the championship standings. Smith currently enjoys a 25-point lead over his teammate Pol Espargaro (81pts), with CWM LCR Honda’s Cal Crutchlow (74pts) a further 7 points back. Smith suffered from technical issues in last year’s race, eventually crossing the line in 22nd, but has finished on the podium at Silverstone twice before (125cc – 2010, Moto2™ – 2011). Espargaro finished as the leading Satellite rider in last year’s race in sixth, while Crutchlow had to settle for 12th on the Ducati. Both Espargaro and Crutchlow have experienced victory at Silverstone before though, the Spaniard in the Moto2™ race in 2012 while the British rider did the double in WorldSBK’s at the circuit in 2010.

It is also the home Grand Prix of EG 0,0 Marc VDS’s Scott Redding. The British rider won the Moto2™ race at Silverstone in 2013 on his way to finishing second in the championship. He also won at Donington in 2008 in the 125cc race, becoming the youngest ever GP winner (15 years and 170 days) in the process. Last year Redding finished tenth on the Gresini Open Honda.

The Octo British Grand Prix kicks off on Thursday with the official Press Conference at 17:00 local time. Free Practice begins on Friday morning at 9am with Moto3™ FP1.