Eugene satisfied with progress on opening day at Indianapolis 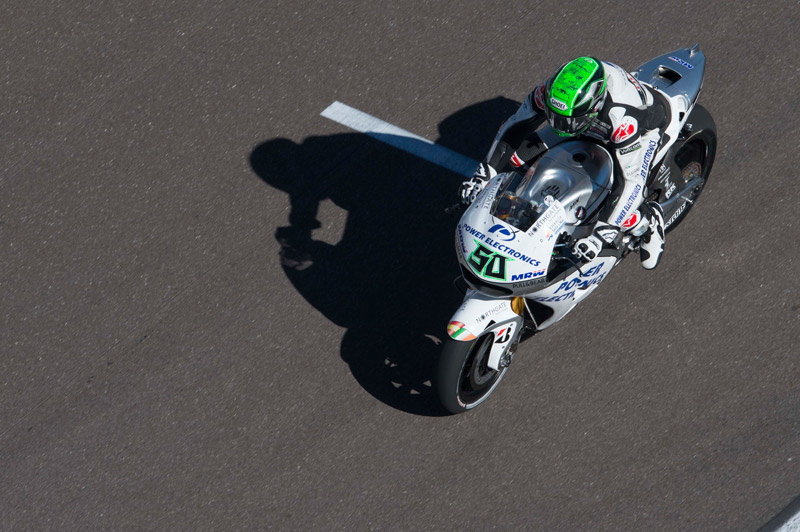 The MotoGP World Championship has resumed following a three-week summer break, with the Indianapolis Motor Speedway playing host to an opening day of free practice marked by high temperatures and low grip levels on track.

On a weekend in which Marc Márquez will aim to continue his dominance of races on American soil in recent seasons, the fastest time today was set by Jorge Lorenzo, although only by the smallest of margins. Just 0.003 seconds separated the two Spaniards today, with Italy’s Andrea Dovizioso following closely in third place.

POWER ELECTRONICS Aspar rider Eugene Laverty has come back from the summer break feeling refreshed and motivated for the second half of the season, which he is determined to kick off with a strong showing at Indy.

Eugene was just over half a second behind teammate Nicky Hayden in nineteenth place, as he got to grips with Indianapolis on his first visit to this circuit on a MotoGP bike.

19th Eugene Laverty 1.34.923 (39 laps):
“Indianapolis is a nice, fun track and the first corner in particular is impressive. You go in there really fast and it took me a few laps to adapt but by the end I was really enjoying it. The temperature picked up quite a lot in the afternoon, it felt like a different track and the bike was sliding around a lot. Compared with Sachsenring this has been a more positive start to the weekend. We have worked on the rear-end set-up to try and find some confidence, the bike felt more balanced and I was more comfortable. We are still not in the position we would like to be in so we will have to keep working hard tomorrow to improve. But I am optimistic after today and I think we can do a good job tomorrow. We need to improve under hard braking but I think the potential is there.”