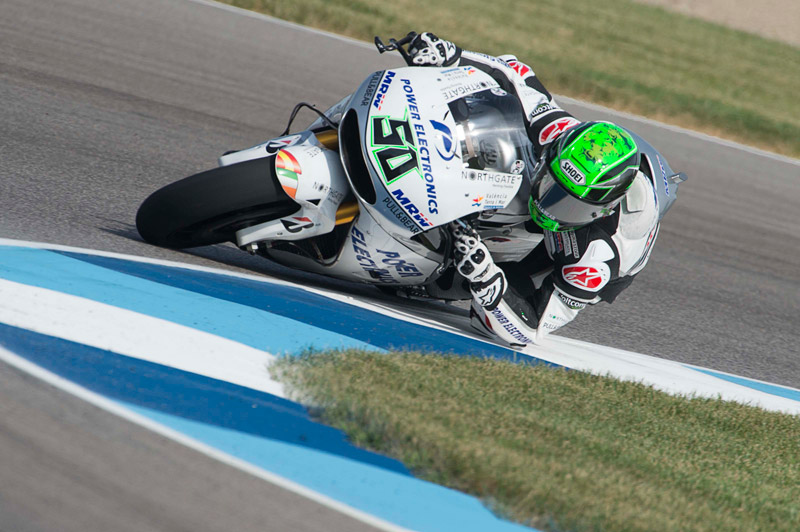 It is no secret that Marc Márquez is the King of America in MotoGP terms and even though Jorge Lorenzo emerged as a pretender to the throne yesterday the reigning World Champion was back on top in all of today’s sessions at Indianapolis.

Márquez’s pole position time came on the second lap of qualifying this afternoon and although a bunch of riders came close, nobody else was able to break the 1’32 barrier and close in on his effort of 1’31.884. Even though his pole time was shy of his 1’31.619 last year, Márquez remains very much the favourite to repeat his win here although fellow front row men Dani Pedrosa and Jorge Lorenzo cannot be ruled out.

POWER ELECTRONICS Aspar rider Eugene Laverty is ready to start tomorrow’s race from nineteenth on the grid after building his confidence and pace throughout the weekend. After taking a step forward in the braking zones today the Irishman is focused on battling for ‘Open’ victory tomorrow.

19th Eugene Laverty 1.33.978:
“It wasn’t a fantastic qualifying session for us but at least we improved from yesterday in both this morning’s session and this afternoon. I feel more comfortable on the bike, which is important for the race. It would have been more positive to qualify higher up but I want to be optimistic. I think that we can still have a satisfactory race. Our pace today was quite consistent so we will try to put up a big fight tomorrow. It will be difficult to beat Barbera but the goal in this second half of the season has to be for us to be the fastest Open bike. Yesterday we worked hard on braking, this morning we continued in the same way and we took a step forward – now I can brake harder and safer.”