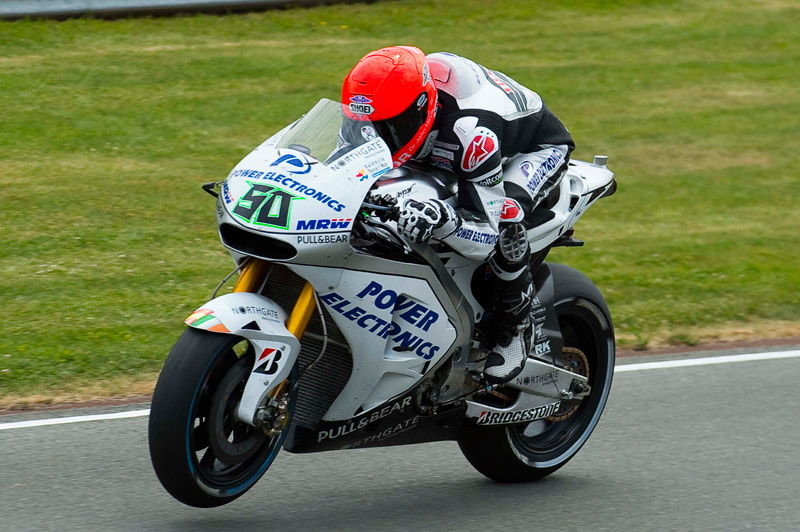 The MotoGP race at Sachsenring today went very much to form as Marc Márquez extended Honda’s domination of the German GP for another year.

Jorge Lorenzo led briefly at the start but he was soon overpowered by his fellow Spaniard after just five laps, with Marquez quickly opening up a second advantage over the next two laps and consolidating his position at the front.

Behind him his team-mate Pedrosa did battle with the Yamaha pairing of Lorenzo and then Rossi, beating both of them to complete a Honda one-two, with the Italian taking the final podium position and extending his advantage at the top of the championship.

Eugene Laverty struggled for grip in the early part of the race but gained momentum as the laps passed, eventually making his way up to seventeenth place after starting back in 23rd.

17th – Eugene Laverty:
“The start of the race was tough because I didn’t have any grip on the rear. As soon as I opened the throttle the bike started to slide and I had a few scares. Suddenly halfway through the race the tyres hooked up and I was able to lap faster than I had on new rubber. I guess we need to work more on the bike to make it more balanced. The fact we set our fastest lap at the end of the race shows that the potential is there but we need to exploit it better. The new swingarm gave us more grip but we have to adapt to it and find a balance. It has been a tough weekend but we’ll come back after the summer break ready to work hard and improve.”