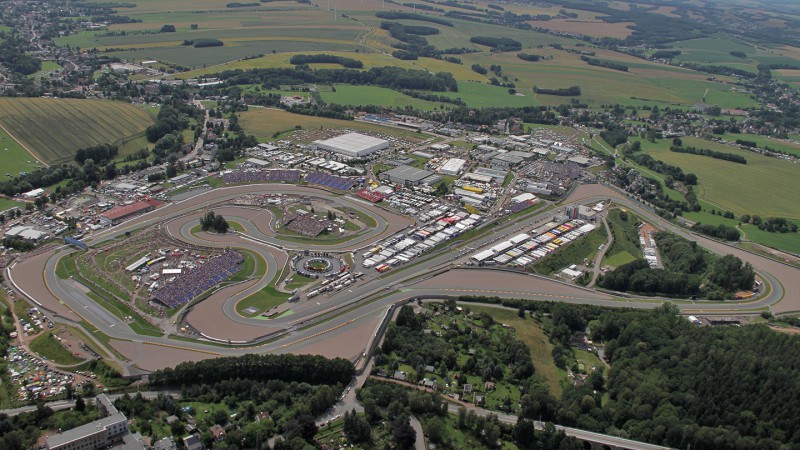 The 2015 German Grand Prix will be the 77th time that a GP has been held on German soil, with the legendary Sachsenring having been the venue since 1998. The 3.6km Saxony course first hosted the East German GP in 1961, but now it is due to play host to the latest chapter of the enthralling saga that is the 2015 MotoGP™ World Championship season.

The touch paper was well and truly lit at the Dutch GP, as Rossi and Marc Marquez made headlines all around the world with their incident at the last chicane, and now it is time to stand back and watch the fireworks once again.

Rossi, after taking his third win of the season last time out in Assen, has a ten-point advantage over his teammate Jorge Lorenzo at the top of the championship standings. The “Doctor” has four MotoGP™ victories at the Sachsenring, although his last came back in 2009 when he arrived at the German GP in incredibly similar circumstances. The Italian had a nine-point advantage in the standings over his closest rival Lorenzo, and also had three victories to his name that season. Rossi will be hoping that history repeats itself, as he went on to take victory at the Sachsenring from Lorenzo by just 0.099s in a season defining battle, on the way to lifting his ninth World Championship title. The Italian could only manage to finish fourth during last year’s rain-affected race, 19 seconds behind the eventual winner Marc Marquez.

Lorenzo will be keen to bounce back from a performance in Assen that saw him cross the line in a lonely third. The two-time MotoGP™ World Champion struggling to find the rhythm that had seen him lead the last four races from start to finish. The Sachsenring is one of only three circuits on the current calendar that the Spaniard has not won at before, with the others being the recent additions Austin & Argentina. Lorenzo finished third in last year’s race, and has not finished off the podium in the last 5 races he has started at the German track.

Repsol Honda’s Marc Marquez will be out for revenge at the German GP, after losing out to Rossi in the last chicane battle at Assen. The reigning MotoGP™ World Champion seems to have regained some confidence on his RC213V by using a hybrid bike made up of 2014’s frame and this year’s engine, swingarm and electronics, that he says gives him more margin for error. Marquez may trail Rossi by 74 points in the standings, but he could still have a vital role to play in the outcome of the 2015 title, as he showed at the Dutch GP. The Spaniard has dominated the last two years at the Sachsenring, winning both races from pole plus also recording the fastest lap, and his newfound confidence with his bike will make him a real threat once more in Germany.

Dani Pedrosa finished the Dutch GP in eighth after experiencing issues during the race with his second bike due to a crash in Warm Up, which meant that his number one bike was out of action. The Spaniard will be looking for his second podium of the season, since his return from arm pump surgery, at a track where he finished runner up in 2014 and is the most successful rider in history with 6 wins (2x250cc 4xMotoGP) throughout his career.

Ducati Team’s Andrea Iannone consolidated his third place in the championship standings by claiming fourth at the Dutch GP, the third race in a row he managed to finish as the leading Ducati, in the process extending the advantage over his teammate Andrea Dovizioso to 20 points. Iannone finished fifth in last year’s race at the Sachsenring on the Satellite Pramac Ducati, his best MotoGP™ finish at the circuit, although he did achieve a Moto2™ podium in 2010. Dovizioso will be hoping to turn around his recent fortunes after a vibrating seat unit caused him to finish in 12th at the Dutch GP. This result came after two DNF’s in Catalunya and Mugello, and the Italian will be looking to bounce back at a circuit he finished eighth at last year, and stood on the MotoGP™ podium (3rd) back in 2012.

Team Suzuki Ecstar’s Aleix Espargaro and Maverick Viñales finished in 9th and 10th respectively at the Dutch GP, after they both complained of a lack of acceleration with their GSX-RR’s compared to their rivals. The Japanese manufacturer will be hoping to make further strides forward at the German GP as they continue to impress on their return to the premier class. Espargaro crossed the line in last year’s race at the Sachsenring in sixth on the Forward Yamaha, while Viñales was fifth in the Moto2™ race.

The battle to be the leading satellite rider intensified in Assen as Monster Yamaha Tech 3’s Pol Espargaro (5th) led home Cal Crutchlow (6th) on the CWM LCR Honda and his teammate Bradley Smith (7th). Smith, who could only manage to cross the line 19th in last year’s rain affected German GP, has now had his lead in the standings over his compatriot Crutchlow cut to 20, with Espargaro just one point further back. Crutchlow equalled his best ever MotoGP™ result at the Sachsenring in 2012 when he finished in second, while Espargaro has also finished on the podium (3rd) at the German circuit in the 2013 Moto2™ race.

EG 0,0 Marc VDS’s Scott Redding has admitted his frustration at his performance so far this season, and knows he needs to start producing results on the Factory spec Honda soon. The Brit would love to head into the summer break on the back of a good finish at the Sachsenring, although it is a track he has struggled at in the past and could only manage to cross the line in 11th last year.

Athina Forward Racing’s Loris Baz (14pts) took the Open class victory at Assen to close the gap in the standings to just two points to leader Hector Barbera (16pts). Nicky Hayden (Aspar MotoGP Team) will be looking to follow up his 16th placed finish in Assen by getting back amongst the points at circuit he completed 3 successive podiums at between 2005-2007. Hayden’s teammate Eugene Laverty was disappointed to have crashed out of the race in Assen after finally receiving the new swingarm from Honda and will be eager to renew his efforts this weekend, while Jack Miller will be hoping to be back fighting for the class win at a track he was victorious at in the Moto3™ race last year.

Stefan Bradl (Athina Forward Racing) will be forced to miss his home Grand Prix after breaking his scaphoid in Assen, his team have elected to run Claudio Corti as a replacement. Corti has previous experience with the team competing in both Moto2™ and MotoGP™ with Forward Racing. AB Motoracing’s Karel Abraham will also sit out the Sachsenring as the Czech attempts to recover from a foot injury sustained during the Catalan GP, HRC test rider Hiroshi Aoyama will ride in place of Abraham this weekend.

Last year’s MotoGP™ race at the Sachsenring was affected by mixed weather, and saw a manic race as fourteen riders had to start the race from pit lane after deciding to change bikes after their warm up lap.