A weekend at the Races for Eugene 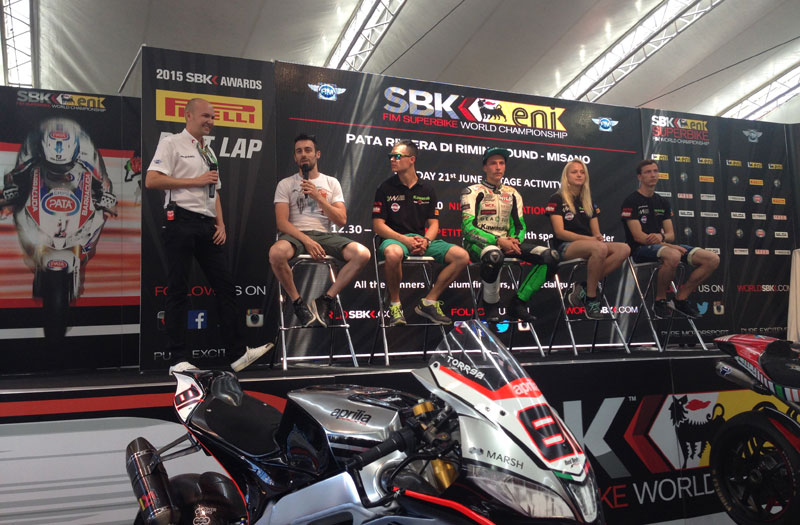 A weekend off for most would be a time to kick back and relax away from a working environment but for Eugene Laverty last weekend’s World Superbike round at Misano was a perfect opportunity to catch up with old friends.

“I can’t think of many better ways to spend my weekend off than going to watch my friends racing,” said Laverty. “I’m pretty sure the race track is the last place that some racers would choose to visit on their free weekend but sometimes I just can’t get enough of it!”

The Irishman raced in WSBK for four years and with the racing calendar so busy this was one of the only opportunities for him to attend a race. Being a spectator offered a very different viewpoint on the weekend for Eugene. Instantly he was keen to take advantage of this by watching the action from trackside.

“It was great to get out trackside and watch the guys in action as that’s something I’ve never really been able to do before. Think about it, I’d always been out there on track with them for the past four years so it definitely felt strange to be stood on the other side of the fence.”

However despite spending the weekend watching the action from trackside Eugene is keen to get back on track himself this weekend. The Dutch TT at Assen is one of the most historic races on the MotoGP calendar and having won there three times, in WSS and WSBK, Laverty can’t wait to get back racing.

Having scored points in the last three races Eugene had hoped to test new parts at the post Catalan Grand Prix test. However, rain interrupted the planned schedule and now Thursday’s opening practice in The Netherlands has added significance.

Eugene Laverty:
“I really enjoyed catching up with everyone again in Misano and I was made feel very welcome by my former team Voltcom Crescent Suzuki. Alex Lowes has become a good friend and his twin brother Sam was also there in support so I spent most of the weekend in Alex’s corner. The level of the riders is still as high as ever which makes it even more impressive to see Johnny Rea running away with it. I enjoyed spectating for a little while but once those lights went out I wanted to be out there in the mix! My attention is back on the job in hand now that I’m back home for a few days so it’s time to begin my preparation for Assen.”