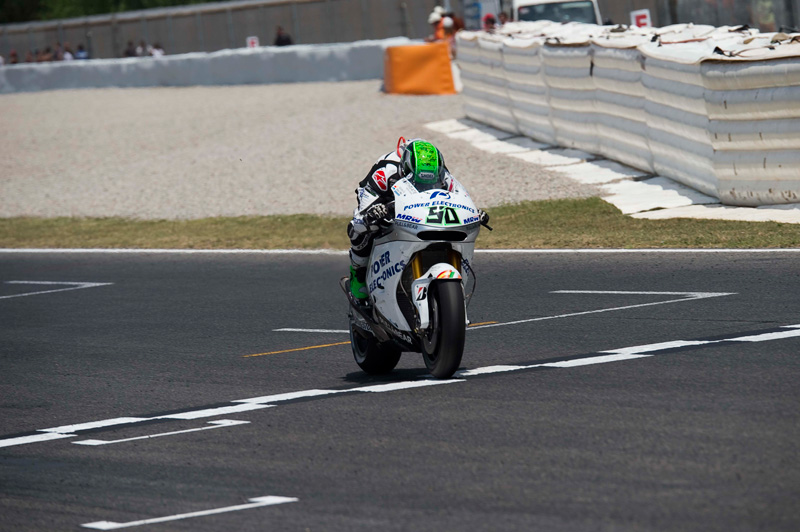 Different circuit, same result. After taking his third straight win last time out at Mugello, Jorge Lorenzo made it four from four in the GP of Catalunya today with another supersonic charge from the first corner to the chequered flag.

The Mallorcan led every one of the 25 laps today and, like in Jerez, France and Italy he opened up a crucial gap at the front that the rest of the field were unable to bridge; despite the valiant attempts of his team-mate Valentino Rossi, who finished second.

Marc Márquez did his best to give chase in the early laps but crashed on the third lap, handing an invitation to Lorenzo that he was happy to accept. Dani Pedrosa crossed the line third in a race of attrition that saw just sixteen riders take the chequered flag.

One of those sixteen riders was Eugene Laverty. After a tough weekend that included two crashes yesterday the POWER ELECTRONICS Aspar rider came back strongly today to seal his best result in MotoGP so far, scoring points for the third race in succession.

Despite starting from 22nd on the grid, the Irishman took advantage of some crucial front-end set-up improvements found in this morning’s warm-up and rode a determined race to take four championship points in twelfth place.

Eugene will remain at the circuit for testing tomorrow.

12th Eugene Laverty:
“We started out well on Friday but yesterday was a tough day with the two crashes. We lost some confidence and time but this morning we reacted well and improved the bike for the race, so I am happy with this result. We found an improvement to the front end in warm-up that gave us some more grip and allowed me to get the bike stopped with a full fuel tank. Our weak point was at the end of the race when the tyres lost grip and I lost a few tenths between turn nine and the final sector. Anyway, the fact we improved today is a positive and it meant I was able to ride with confidence throughout the race. We have an important test tomorrow with some new material to try so hopefully we can build on the progress we made today and find something extra.”