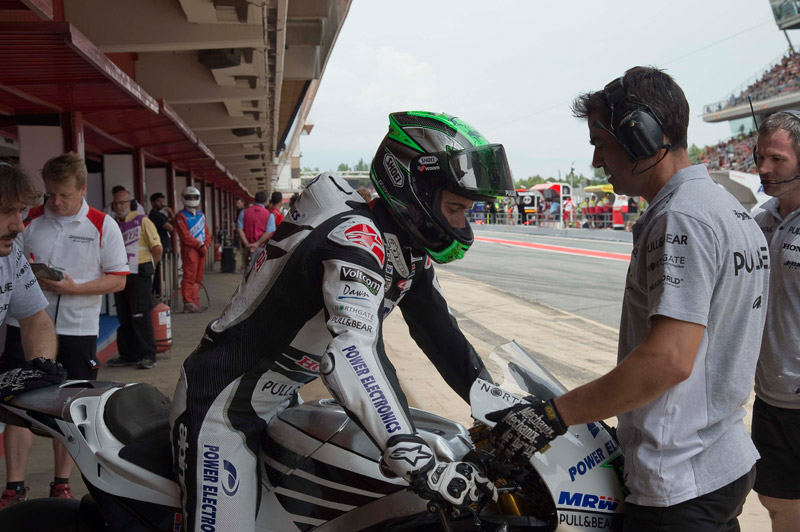 Aleix Espargaró grabbed the headlines on the second day of the GP of Catalunya today, the local rider claiming an impressive pole position after battling throughout qualifying with two World Champions in the shape of Marc Márquez and Jorge Lorenzo.

The three-way battle turned into four in the dying moments of the session as Espargaró’s team-mate Maverick Viñales closed to within 0.083 seconds and sealed a memorable one-two for Suzuki. It is the first pole position for the Japanese factory since 2007 (Assen) and with four Spanish riders in the top five positions on the grid the home crowd will be hoping for an all-Spanish podium in tomorrow’s race.

POWER ELECTRONICS Aspar rider Eugene Laverty had to dust himself down from two crashes today. The Irishman thankfully emerged unscathed from both and will start the race from 22nd position.

22nd Eugene Laverty 1.42.971:
“Today has been a bit of a tough day for us, with two crashes – one in turn five and one in turn three. The first one was stupid and I am annoyed about it, the second one I lost the front. We have worked hard all weekend on the rear but we are still having some problems. Both bikes are similar but I prefer my number one machine and after the crash I had to go into qualifying on the second one. Yesterday was positive and we found some solutions but today wasn’t as straightforward. Hopefully we can turn things around tomorrow and enjoy the race.”