Eugene rounds off difficult Mugello weekend with another points finish 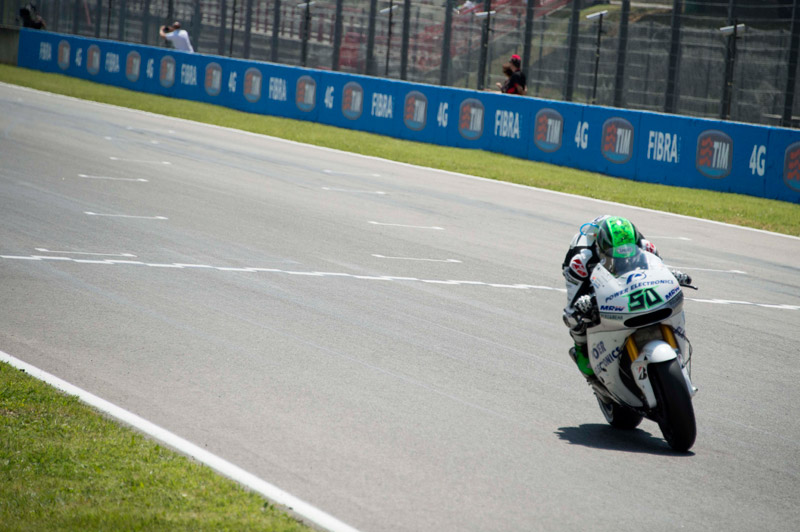 The excitement of seeing several MotoGP riders fighting for victory in the Italian GP was brief. The Ducati riders flaunted the power of their engines at the start, but the rider who led the way at the front from the first lap was Jorge Lorenzo.

From Lap 4, Lorenzo brought up his pace to that of the practice sessions to extend his lead to 8 seconds. Behind him, Andrea Dovizioso, Andrea Iannone and Marc Márquez provided the excitement on the track, with Dani Pedrosa and Valentino Rossi joining them from further back.

Before the end of the race, Dovizioso suffered a mechanical issue, Marquez crashed and Pedrosa dropped off. Lorenzo won his third consecutive race, whilst Iannone and Rossi accompanied him on the podium at their home round.

Paradoxically, in the two rounds that Eugene Laverty has felt least comfortable –the French and Italian GPs- are the races at which he has taken his most satisfactory results.

After suffering throughout the weekend to set up his bike, the POWER ELECTRONICS Aspar rider qualified in twenty-fourth position. The first part of the Italian GP was productive for the Northern Irishman, who gained many places thanks to passes and crashes for his rivals.

Although in the last part of the race he lost feeling with the front end, Eugene managed to reach his goal of placing inside the points by finishing fifteenth.

15th Eugene Laverty:
“Both at Le Mans and here we experienced difficult weekends, however these are the only two races at which I have scored points. It’s a strange feeling; on one hand I am unhappy with my feeling with the bike, but on the other we scored points. Being realistic, I finished ten seconds behind where I should be. In the first two parts of the race we were able to keep a steady pace, however, in the last third the bike became difficult to ride. We are working in the right way, but we must persevere to find a more balanced bike setup that allows me to ride an entire race smoothly. On chicanes and areas where I need the bike to flow, I have to put a lot of weight on the front in order to corner. My strength is braking but we have to sacrifice this in order to corner better. I hope to gradually gain experience and find a more balanced setup.”