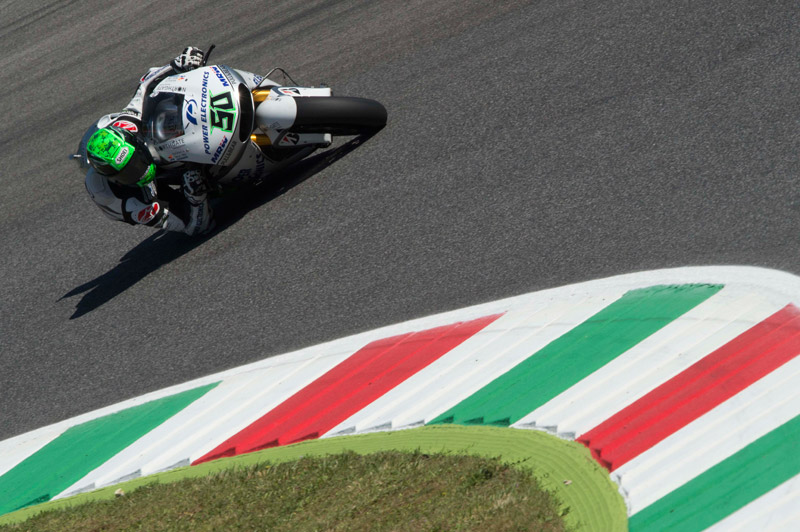 Mugello welcomed the MotoGP riders with bright sunshine and temperatures hovering around 25ºC on Friday, as the Italian GP weekend began.

It was shown on the opening day that Ducati had done their homework at the exclusive test that took place there recently, as Andrea Dovizioso topped the timesheets in both of the practice sessions held.

The Italian rider lapped below the circuit record and close to the best lap ever set at Mugello. His overwhelming dominance served as a warning to his rivals.

Eugene Laverty also set his best pace and fastest lap of the day in the morning. The Northern Irishman placed twentieth in the first session, but an afternoon crash on the last corner of the Mugello track prevented him from going higher than twenty-third.

Eugene identified the setup of his front forks as the culprit for the crash, and will look to eradicate excessive sliding in tomorrow’s practice sessions.

24th Eugene Laverty 1.49.815 (34 laps):
“I’d gone a long time without crashing and now we have had five crashes since Jerez. All of them have been the same, losing the front, so we have to work to improve the setup and get the front wheel to completely stop sliding. I have confidence in the front tyre and I always try to push, so we have to find a setup for the forks that is much more secure in order to prevent crashes. The lap was still very good, with new tyres, but it was a shame about the crash. I accept my part of the responsibility but hopefully we can learn from this fall. The positive thing is that today, after trying different configurations, we have improved the maneuverability of the bike. I always brake very strongly but I was finding it hard to turn the bike in, and today we carried out a change in geometry thanks to which I can now turn much better. It has not been a big change, but this bike is very sensitive, so a small change has given us a lot and now it seems that the bike weighs 20kg less.”