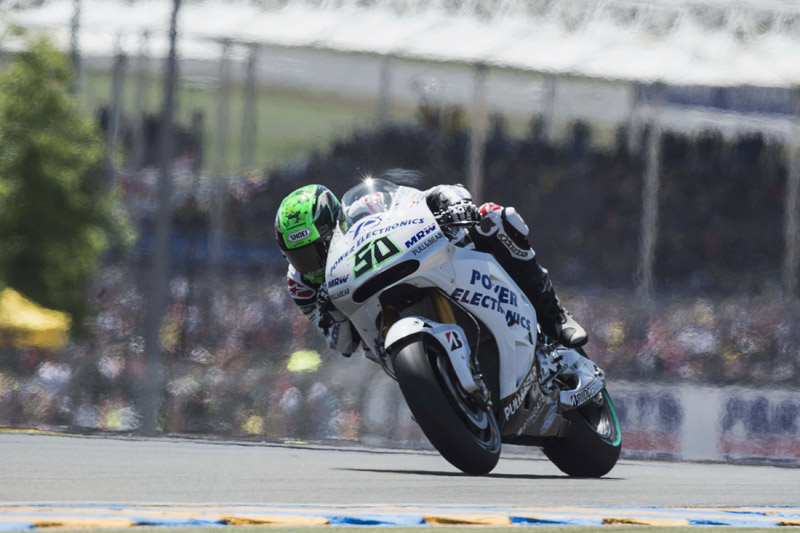 Eugene Laverty finished his Le Mans weekend on a positive note in spite of having to fight back through the field after an early run-off, leaving him happy with his performance and optimistic for the coming rounds.

Marc Márquez may have started today’s race from pole position but the full half-second advantage he held over his rivals after qualifying yesterday proved to be nothing but an anecdote today after a dramatic change in conditions seemingly handed the initiative to his rivals.

Jorge Lorenzo started from third on the grid but the Spaniard took control from the first corner and produced a carbon copy of the dominant ride that took him to victory in his home race at Jerez two weeks ago.

His consistent pace in the mid-1’33s was enough to maintain a cushion over the comeback king Valentino Rossi, who followed him across the line almost four seconds behind in second place as Andrea Dovizioso completed the podium.

POWER ELECTRONICS Aspar rider Eugene Laverty picked up points, his first of the season, after a battling display – and making a positive finish to what had been a somewhat frustrating weekend.

The Irishman was run wide in the second corner of the first lap but he fought back from virtually last place to move up to fourteenth position and open his MotoGP account.

14th Eugene Laverty:
“The objective before the race today was to score points and we have achieved that. The key was the good work done by my mechanics once again this weekend. We have had a good setting for the past few races but this was a different kind of circuit and we found ourselves on the back foot on Friday. We had to make big changes to the front end of the bike and our work wasn’t made easier by two crashes, which were down to a mistake with tyre choice. I made a good start to the race but in turn two, with all the traffic, I touched with another rider and ran off track. I lost a lot of ground there and found myself almost at the back. I thought it was going to be a complete disaster but pushed hard and tried to make up as much ground as I could. I set some consistent laps and managed to get in the points for the first time this season. I am happy with that and hopefully we can keep it up for the upcoming races.”