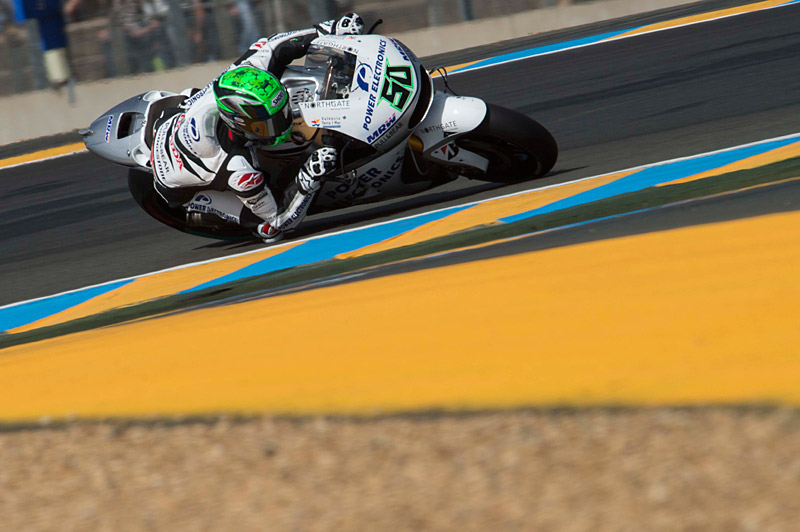 The MotoGP riders were back on track at the Bugatti circuit in Le Mans today as the GP de France got underway with Dani Pedrosa back in action after six weeks out.

The Spaniard looked like he might still be struggling with arm-pump in the opening session but in free practice two this afternoon he was more competitive as he clocked the seventh fastest time. Dovizioso set the pace this morning before Jerez race winner Lorenzo dominated the afternoon, only for Smith to deny him the fastest lap of the day right at the end.

The British rider sits atop the overnight timesheets at a circuit that has traditionally favoured Spaniards. It was here that the first al-Spanish podium happened back in 2003 (Gibernau, Elías and Pedrosa).

It was a frustrating day for Eugene Laverty as he struggled to get to grips with a circuit he feels like he is visiting for the first time. The Irishman has not been here since 2008 and after suffering front-end issues today he finished the day in 23rd place.

23rd Eugene Laverty 1.35.182 (42 laps):
“It is a long time since I rode here so it was like the first time again today. It was a strange day for us, even though we had plenty of track time. We had some problems with the front end and I don’t remember finishing a session so far back. Our set-up has worked well at other tracks but this one is quite unique, there isn’t a lot of grip and we lost some confidence in the front. We pushed hard but the lap times didn’t come and I didn’t feel comfortable on the bike. We will have to adapt the bike better tomorrow because it is not turning in some sections of the track.”