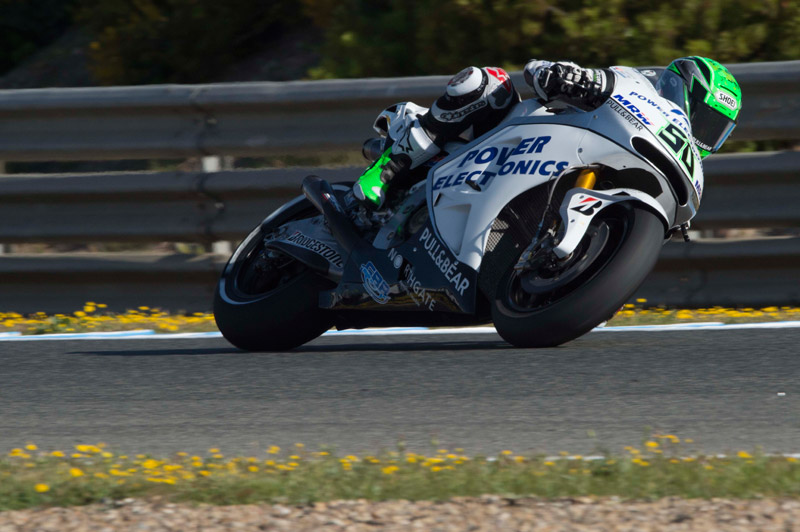 Eugene Laverty was pleased with the overnight changes he made to his Aspar ‘Open’ Honda for the Spanish MotoGP at Jerez today but later revealed they inadvertently led to arm pump issues during the race.

The Irishman, who is still searching for his first points finish in the class, felt he cured the rear grip issues that plagued his qualifying but the set up change put more pressure on both arms through Jerez fast, sweeping bends.

Although strong early on, Eugene faded through the 27-laps and was powerless to stop Alvaro Bautista, Stefan Bradl and Nicky Hayden getting past in the closing stage of the race.

“For me the bike was better than me today,” said the 28-year old. “The change that we made in the morning, I’m happy in one aspect because we finally fixed this strange rear grip problem that we’ve had in races. The rear grip stayed there but we’ve fixed one problem and created another. The bike was so rear biased I got arm pump after seven laps and couldn’t race the bike towards the end.

“Where I had the problem was these short areas [the two fast rights that end the lap] where I have to accelerate and climb forward on the bike because there was so much bias towards the rear. It’s a strange situation because if you look on the computer it may only show a few millimetres but when you’re a rider on the bike it feels like you’re climbing a ladder to reach the handlebars. That’s where I was losing time and that’s where the arm pump was really difficult.”

In light of these problems, Eugene remained upbeat, believing he went too far in one direction that aimed to eradicate the grip issues that had afflicted his Austin and Argentinean weekends. Positives can still be drawn.

“The start of the race was really good. I felt positive. The bike was fantastic. That’s something we’ve struggled with so far, in America and Argentina, the race. I didn’t have less grip than the other riders but once the tyre started to move around the setting change that we made to fix our problem we had with grip, we went too much in that direction.

“We made the bike too rear biased. So when it came towards the end of the race I was spinning the rear tyre and it was difficult to drive forward. I’m happy because we fixed one problem but disappointed we went too much in that direction.”