Promising start at Jerez for Eugene with 15th position 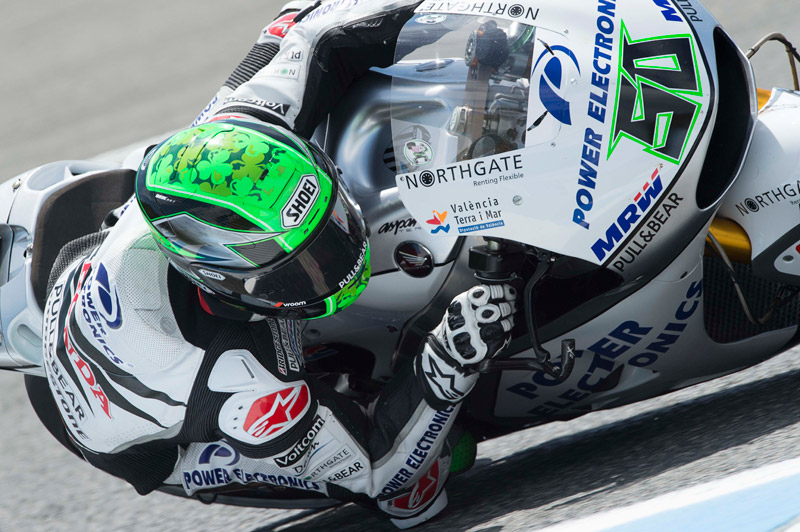 The first day of the Spanish Grand Prix took place today as Jerez celebrates its status as World Capital of Motorcycling in a scorching spring heatwave.

With temperatures hitting 30ºC ambient and 45ºC on track, it has been a red hot start to the European season in the heart of Andalucia.

Marc Márquez may not be 100% fit after his recent operation to fix a broken finger but he was able to lap third quickest today as Spanish riders dominated at their home circuit.

Indeed five of the top ten fastest men today were Spanish, with Jorge Lorenzo setting the pace in both sessions as the top fifteen riders lapped within a second.

It was a positive start to the weekend for POWER ELECTRONICS Aspar rider Eugene Laverty, even though his progress was halted somewhat by the rapid change in conditions this afternoon.

Both Eugene and teammate Nicky Hayden lost rear traction as the track temperature soared but they weren’t the only ones as over half the MotoGP field failed to improve their lap times from the morning to the afternoon.

Even so Eugene made his strongest start to a Grand Prix so far this season with the fifteenth fastest time of the day, less than a second off Lorenzo.

Although satisfied with the day’s work, Eugene is nonetheless determined to make further improvements tomorrow.

15th Eugene Laverty 1.40.114 (38 laps):
“This has probably been my best Friday in MotoGP so far because I didn’t have to spend the first two sessions learning the track. We were in the top fifteen all day so it’s been a positive start. We could have dipped into the 1’39s this morning but it was more difficult this afternoon because the track temperatures increased so much and the bike started to slide. We have worked hard to find more rear grip here. We did a great job in practice in Argentina and Austin but struggled for grip in the race so we want to make sure that doesn’t happen again here. On one hand I want to make sure we are ready for the race but at the same time I can see the top ten from where I am and it would be nice to try and get into Q2 tomorrow. But clearly the race is the most important thing so that is the main focus. Today we worked with a variety of suspension configurations and we have to check over the data to find a balance between being fast and being consistent.”