Eugene takes 17th in Argentina, suffering from lack of grip 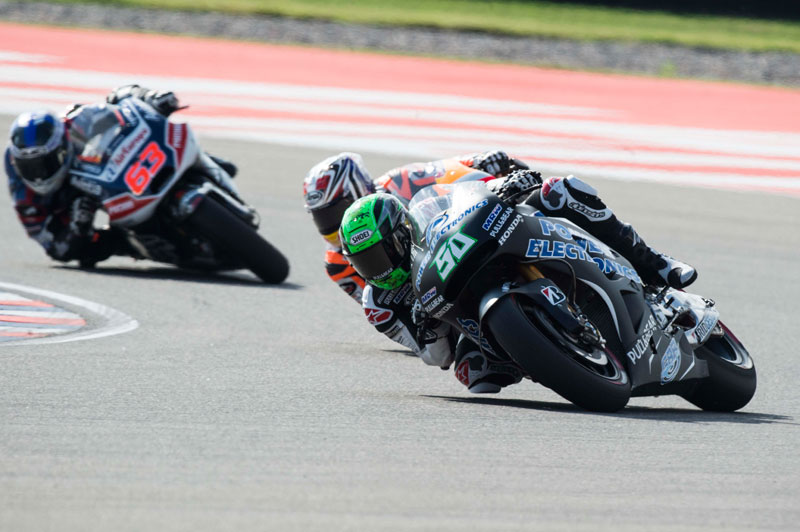 The MotoGP race at Termas de Río Hondo was a close battle of strategy to the end, in which tyres played a crucial role in the outcome.

Marc Márquez burst away at the front, but by the end his tyres had slowed him down and Valentino Rossi –starting from eighth on the grid- gradually caught up with him.

The Italian overtook Petrucci, Espargaró, Lorenzo, Iannone, Dovizioso and Crutchlow along the way, and with three laps to go reached Márquez. After an initial attempt to pass was defended, on the second Márquez clipped Rossi and crashed out.

Rossi went on to win the race, whilst Dovizioso and Crutchlow, five and eight seconds behind,respectively, joined him on the podium.

Eugene Laverty was also unable to close the weekend in Argentina successfully. The Northern Irishman had completed his best round of practice sessions in MotoGP so far in the run-up to the race, but on Sunday he encountered problems.

A loss of feeling with the rear and a lack of grip forced him to ride with caution and he concluded the race in seventeenth place.

17th Eugene Laverty:
“We’ve done a great job this weekend, probably the best since I’ve been in MotoGP. In contrast, today I completely lost rear grip and I was not able to continue performing at my best. The other riders who were going round with me had much more grip when cornering, and the behaviour of our bike had changed a lot compared to practice. We went with the harder tyre compound, which we had been testing throughout the weekend. Everyone today was slower, but our times were significantly slower. I don’t know why, but today we suffered a lot from a lack of grip. The suspension didn’t work the same way as previously during the weekend either. At the beginning of the race the bike slid out a lot and I almost crashed, I lost some time and I realised that something was not working properly. It’s a shame, after the great work we’d done this weekend I was convinced we would get a better result.”