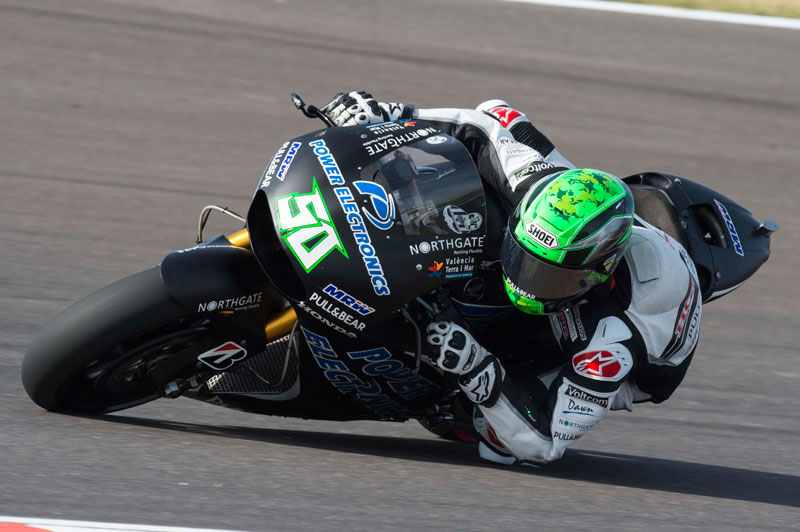 For the second consecutive round Marc Márquez brilliantly claimed the pole, and seems to be ready to repeat his form of the start of last season. The Spaniard was over half a second from his nearest rival, having dominated Q2 from start to finish.

This time it has not been necessary to run down the pit lane or produce a seemingly impossible lap, as he was in front from the start, and merely had to gradually lower his lap time. Aleix Espargaró finished second to prove his form on the first day was no flash in the pan and that he is ready to aim for the podium.

Tyre wear at this abrasive circuit could be a determining factor at the end of Sunday’s race. There was trouble again for the Yamaha riders on the second day, as the best, Jorge Lorenzo, was ‘only’ fifth.

Eugene Laverty has also been rewarded today for his good work on the first day, doing a great job again, and getting ready to race. Already this morning he had achieved a great time which allowed him to finish seven tenths off the best lap.

A positive effort considering the length of this circuit. The Irishman anticipated that this circuit could require time to adapt to, but despite his inexperience The POWER ELECTRONICS Aspar was 14th in qualifying. He also has a great race pace for tomorrow in Argentina.

Eugene Laverty, 14th, 1’39.434:
“Today has certainly been my best day since I’m in MotoGP. This morning we did a great job, getting really close to the top ten. In Qatar we improved, in Austin too and here we have done it again. Our feeling with the Honda is getting better, we were able to conclude today in 14th position, so I consider it a positive result. The good thing is we’ve got a fast lap, but also in the final practice session we had a strong pace on hard tyres. Today we made some changes to the chassis which allowed me to brake harder. We still need a little more maneuverability in the front end, so during the warm-up session will make a couple of small tests. In general the bike set up is good. I am satisfied, tomorrow I hope to end the weekend successfully, I would definitely like to get some points and have a good battle.”