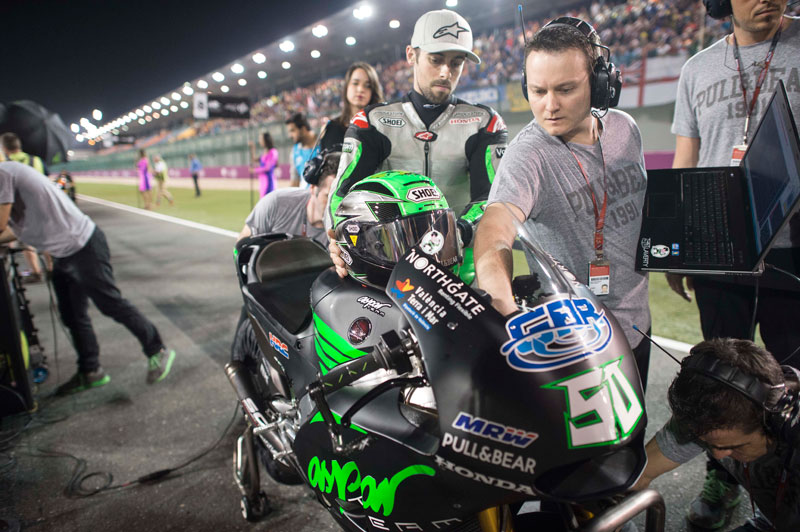 The MotoGP season began with a unique show in Qatar. Dovizioso, first on the grid, held the position with a good start, whilst Márquez went wide on the first corner and rejoined the race in last position.

The Italian pushed hard, accompanied by Iannone and Lorenzo, and the three broke away. As the race went on, Rossi joined the front group, as Márquez continued to climb up through the field. In the end, Rossi passed Dovizioso for the win, with Iannone completing the podium. It was an all-Italian rostrum for the first time since the 2006 season (Japan – Capirossi, Rossi and Melandri).

One will have to wait until Austin to see a positive outcome for the Aspar Team riders. Both Eugene Laverty and teammate Nicky Hayden experienced misfortune today and were unable to perform at their best.

Eugene – like Nicky – suffered with electronic problems, from the start of the race, and was forced to modify his riding to complete the contest. He finally crossed the finish line in eighteenth.

18th Eugene Laverty:
“Unfortunately I suffered electronic problems right from the start of the race, and I couldn’t ride as I had hoped. I was losing a lot of time compared to my laps from the rest of the weekend. It was not how I was hoping to debut in MotoGP but at least I managed to finish the race. Despite the setbacks I have tried to adapt to what I had. Apart from the race, we must be positive; we have progressed a lot over the weekend, we should take that from here and believe that in Austin we can keep improving.”