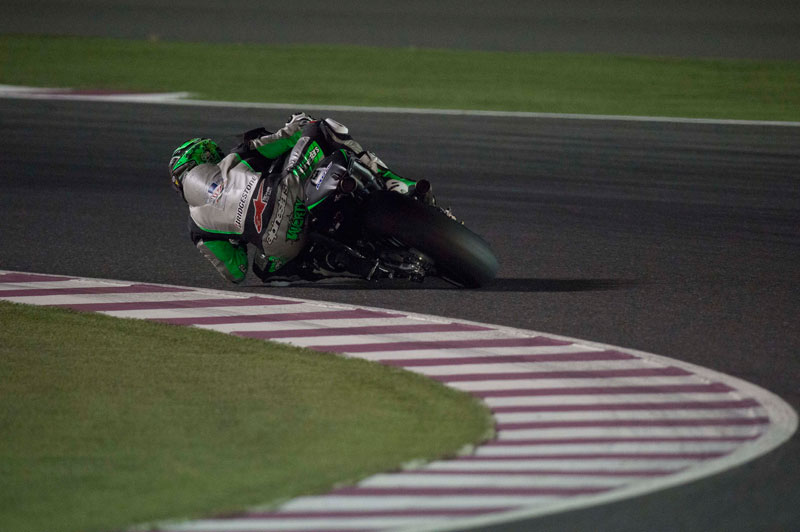 Marc Márquez made his intentions clear in the first of tonight’s two free practice sessions at the Grand Prix of Qatar as he left his closest challenger trailing by four tenths of a second but in FP3 there were signs that he might not have the weekend all his own way.

With Cal Crutchlow just 0.096 seconds behind the Spaniard and no less than eighteen riders separated by less than a second following tonight’s action, everything is set up for a frenetic first qualifying practice of the season tomorrow night.

With just one session available last night the Aspar Team riders were not the only ones who didn’t start their weekend as planned, but tonight both Eugene Laverty and teammate Nicky Hayden made notable improvements to their feeling and lap times.

Eugene found confidence in a different front tyre and was able to lap in the 1’55s. The Aspar Team pair are confident they are on the right path to more improvements tomorrow night, as they prepare for the first qualifying practice of the 2015 season.

19th Eugene Laverty 1.55.913 (33 laps):
“The goal was to improve the lap times tonight and get faster so to be a second off the top, I am happy with that but I didn’t think it would leave me back in nineteenth position. So I have mixed feelings tonight – we are on the right path and I am satisfied but obviously I want more. We didn’t make a great start yesterday but we have responded tonight, taking a big chunk out of the lap time and improving the feeling. We have also focused on our race pace tonight and we understand more about the performance of the tyre. We have done a lot of testing and Sunday night is my first race in MotoGP, I want to make sure I am ready. We have solved the problem we had last night with the front tyre and found an option that works better with my riding style. We have improved our lap time from the test and hopefully we can keep going in the same way tomorrow and qualify in a good position.”