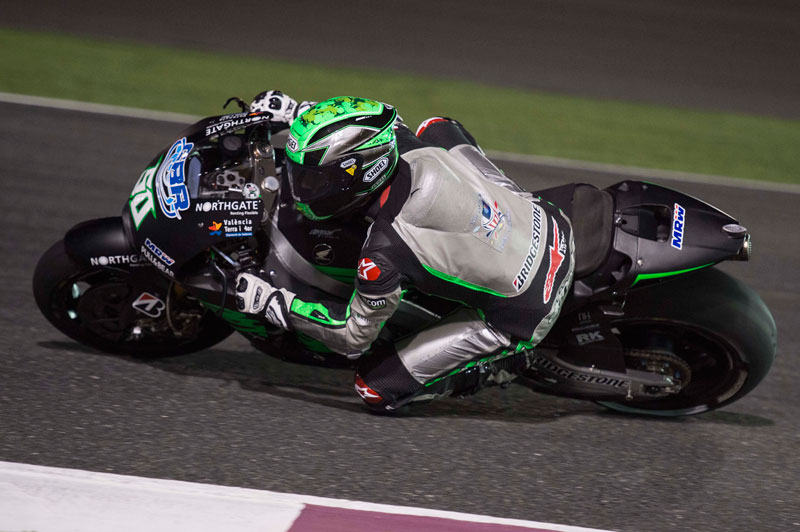 After the customary meetings, team photos, presentations and other ceremonial procedures typical of the first day of the season, the first official track action of 2015 took place beneath the dark desert skies of Qatar tonight.

Under the floodlights of the Losail circuit there was a single free practice session available to the MotoGP riders and the season pretty much picked up from where 2014 had left off, with double World Champion Marc Márquez firmly in control. Only his team-mate Dani Pedrosa was able to get close, with third fastest Aleix Espargaró some four tenths adrift in an all-Spanish top three.

The Aspar Team riders did a great job in the preseason test here but tonight they struggled to reproduce the form and feeling that they found just ten days ago. With just one session available to them it was difficult for Nicky Hayden and Eugene Laverty to react to their disappointing start tonight but they have plenty of time over the next two evenings’ action to put things right ahead of Sunday’s race.

23rd Eugene Laverty 1.57.224 (17 laps):
“We found a really good feeling for the bike here at the recent test and we had a good set-up but from the start of the session tonight I didn’t have the same confidence in the front end. We don’t know why this is but we didn’t have much time to work on it so tomorrow we will change the front tyre and keep working hard to get the feeling back. Tomorrow we will use the information from the test to work with the electronics and the traction control and I am sure I’ll feel more comfortable on the bike.”