Interview with Eugene: “Aspar is a great opportunity for me” 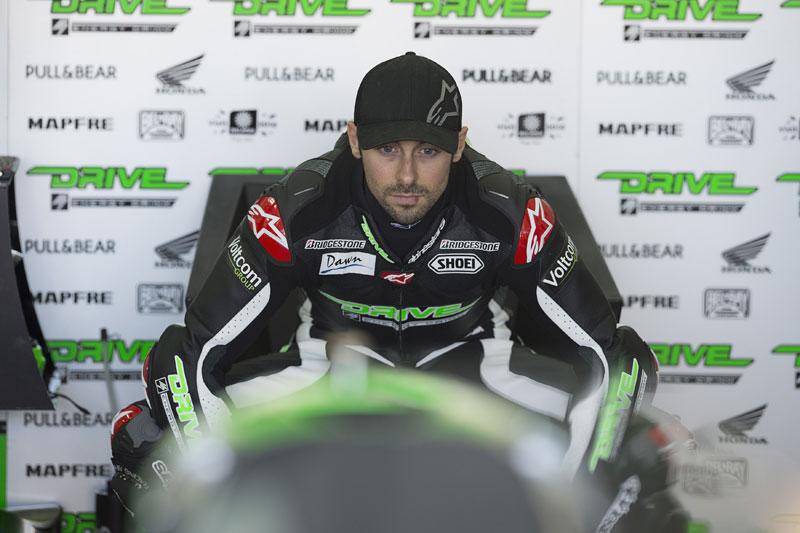 Eugene Laverty returns to the Grand Prix paddock in 2015 with a lot of water under the bridge since his last spell here during the 2007 and 2008 seasons. His career as a 250cc rider was short-lived but the Irishman reinvented himself in the World Superbike paddock and he returns to the MotoGP World Championship through the front door, ready to cause a surprise or two in the premier class.
Behind those shy, Irish eyes lies the steely determination of a rider who accepts nothing less than success, a relentlessly hard worker who has established a reputation as one of the most adaptable riders around. After twice finishing as runner-up in World Supersport and once in World Superbikes, new DRIVE M7 Aspar Team signing Eugene Laverty is finally ready to make his mark in MotoGP…

First things first, what is the main difference between riding a Superbike and a MotoGP?

Mainly the tyres. Pirelli and Bridgestone are completely different. There are other things, such as the Honda is smaller and lighter, it’s easy to move around on. Dragging your elbow on the ground is not a common thing in Superbikes.

What led you to sign for the DRIVE M7 Aspar Team?

Two things really. Firstly I never wanted to come to MotoGP unless I was sure I was on a good bike in a competitive team. Secondly, during last season, I was convinced Honda would make a much better Open bike for 2015. Once I knew that the DRIVE M7 Aspar Team would be continuing with Honda my absolute priority was to sign for them. This is a top level team, which they have proved over the years, and the bike will be a big step forward from last year so I didn’t need to think about it much. DRIVE M7 Aspar Team have given me the opportunity I have been waiting a long time for.

How is the adaptation to your new team going?

The first test was fantastic, even though we lost some time to the rain. I rode the old Honda Open but that wasn’t important. What we were looking for was to start to establish a feeling and for me to get to know the team and vice versa. I was given an incredible welcome and that made me feel at home. It was a successful test for us.

Has signing for the DRIVE M7 Aspar Team been what you expected?

Yes, absolutely. I had been speaking with the DRIVE M7 Aspar Team for some time, since last year actually. We first made contact when the team was still with Aprilia. I was in contact with Jorge [Martínez ‘Aspar’] and Gino [Borsoi] for a while. I have found them to be a professional team, who have been keen to relieve me of any pressure and made me feel comfortable from the start. The electronics package on this bike is actually quite basic compared to Superbikes. It is a system that restricts the amount of changes you can make so we need to learn how to get the most out of it. Everything else about the Honda is fantastic.

How about your new team-mate? In what ways can he help you?

I know Nicky from when I rode in 250cc, seven years ago. He was always friendly and nice with me. He is a very focused individual who works hard, but he’s also charming and genuine. We both come from families of motorcycle racers and we have grown up in competitive environments, so I guess we are similar in that way. The biggest way he can help me is obviously in terms of sharing data. Nicky has been a MotoGP rider for a long time so I am sure I can learn a lot from him.

What was your first impression of the Honda?

The first time I rode the Honda I could tell it was a true racing prototype. I really liked the riding position and its size and weight are perfect for me, I fit really well on the bike.

What do you think are its main strengths?

Watching it from the side of the track I could see that it had good acceleration in corner exit. Once I got on it I felt it was comfortable but it is too early to comment on its strengths. My first impression is that I like the way you can get into the corners fast, get the bike stopped and then pick it up and exit quickly. You could say it is quite easy to attack the corners on the Honda.

I have been in permanent contact with the MotoGP paddock since I left and there are a lot of familiar faces. It feels like yesterday but it’s actually seven years now since I was last here in the 250cc class. It is nice for me to come back and to do so in the top class, with a top team, I consider myself very lucky.

Honda, Suzuki, Yamaha, Aprilia… You have ridden everything, you must be very adaptable.

Yes, I think my adaptability is one of my strong points. I have ridden a lot of bikes over the course of my career. Now and then you might hear a rider saying this bike or that bike suits my style, but the truth is that it’s me that adapts my style to the bike. Riding so many different bikes means I have never got into certain habits and I have never stopped learning.

New bike, new team-mate, new challenge for 2015… what are your objectives?

Well, first of all it would be good to be challenging at the front of the Open class and at certain circuits I want to be fighting with the factory guys. Qualifying could be good for us because we have the soft tyre so hopefully we can take advantage of it.

What do you plan to do over the winter break?

Mainly train. I like to ride supermoto so I will be doing as much of that as I can before the start of the season in Malaysia. Two weeks ago I was in Wales for my brother’s wedding, which was a great family event. At Christmas I’ll take the chance to head back to Ireland and spend some time with my family, because it is difficult to see them once the season starts.